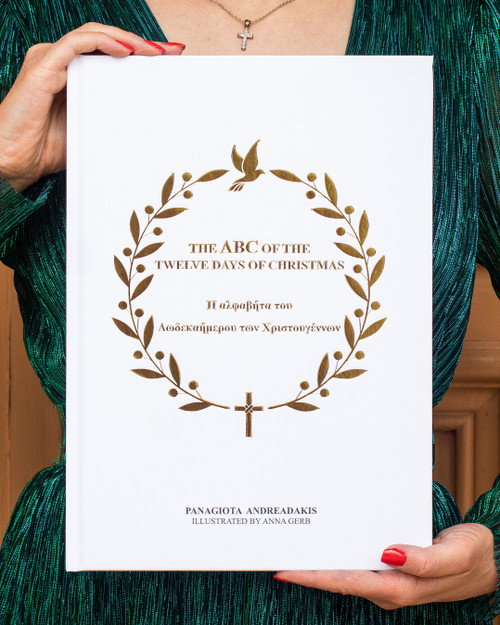 It is a period beginning on Christmas Day the 25th December and continuing through to the Theophany, on the 6th January. During this time families unite to enjoy celebrations and feast in the honour of the Birth and Baptism of Jesus Christ.

Beautiful illustrations help captivate the interest of readers to understand the significance and meaning of Saints, prayers, hymns, carols, religious and cultural traditions, Christmas foods, sweets and the fasting period.

'The ABC of the Twelve Days of Christmas' book will cover the following:

It is the perfect keepsake gift for your children, grandchildren, nieces, nephews, godchildren, baby shower, birth of a baby, christening, have on display or to include in a beautiful gift/hamper.

After working for several decades as a health professional, Panagiota decided to pursue her true passion of Hellenic Culture & Children’s Education. Panagiota was inspired to write books as a way of preserving the wealth of Hellenic heritage and passing it onto the next generations with the same care and passion that it was given to her from her parents and grandparents.

Panagiota has always enjoyed being an active member of the vibrant Melbourne Greek Community. During her youth she was a senior member of a traditional Greek Dance Group and also did volunteer work within the Greek Community of Melbourne.

Inspired by her regular travels to Greece, her love for the Hellenic culture only grew deeper. It gave her the knowledge and skillsets that would help her in developing her idea and turning her dream into a career, bringing pieces of Greece into the readers hearts and homes.